Ok, I have two mini-rants because I’m mad about a couple things. 1) I’m mad at KU fans who are taking “the sky is falling attitude”, and 2) I’m mad about KU losing (I’m not mad at our team or mad at Bill Self – I am frustrated with some things our team does, but they’re college kids – not pros.)

I’m normally a pretty happy-go-lucky guy and I consider myself an optimist. I can find the positives in most situations – if I step in dog poop in my backyard my thought is, “Well, at least my dog isn’t constipated.”  And at the end of this post I think you’ll see I still have high hope for our team and don’t feel that the sky is falling for KU. This year especially college basketball is WIDE open and I still believe we can win the Big 12 title and make a deep run in the tournament.

Let me set the stage and give a little context for those who might be reading this who are not KU fans.

A snapshot of our greatness –

We have had amazing coaches at KU. The inventor of the game, James Naismith, coached at KU and he’s the only coach at KU to have an overall losing record. Phog Allen is considered the grandfather of modern coaching. He coached Dean Smith who found greatness at the University of North Carolina. Phog Allen also coached Adolph Rupp who found greatness at Kentucky University. More recently with our coaches, we were spoiled under Roy Williams when he was our coach. He won several conference titles and went to four Final 4s in 15 years. But then Roy left for home (North Carolina) and Bill Self was hired. Everyone knows you never want to be the guy who immediately follows a legend because expectations and comparisons will be enormous. Absolutely nobody thought Self could do as well as Roy’s 81% winning percentage. Well, Self proved us all wrong! Self has an 84% winning percentage and he’s brought us eight consecutive conference titles, two Final 4s, and a national championship in just 9 years. And all signs are pointing towards that success to continue steamrolling like a powerful locomotive.

At KU we expect greatness! And we produce our own greatness.

Again, as KU fans we are spoiled. UNBELIEVABLY SPOILED! And that’s ok! It’s not our fault we enjoy so much success. We expect greatness from our basketball and they produce greatness. But in this losing streak I’ve seen and heard some ridiculous comments from KU fans. Stop it now! Holy freaking crap, stop it now! Bill Self didn’t become an imbecile and forget how to coach in a 7 day span. Admittedly, this team has peed down its legs in recent games, but this is still the team that won at Ohio State, it’s still the team that looked absolutely unbeatable in December. We are 19-4. Our talent ceiling, as we’ve seen many times this year, is very high. So it’s time to stop your bitching and support this team.

Along with being mad about KU fans acting like the world is coming to an end because of our 3 consecutive losses I’m mad about another thing. I’m sick of us losing. 14 days ago we were ranked #1 in the country in the coaches poll and then on Wednesday we lost at home to Oklahoma State. Honestly that loss felt like it was a long time coming because we had been flirting with losing a couple other games. But hey, no problem, shake it off and regroup. Well, then we lost at TCU…T-C-U! A bunch of frogs who are a VERY bad team. Losing consecutive games was foreign territory for KU fans. We hadn’t lost consecutive games in 7 years…7 years! Think about that, that’s incredible! Ok, we’ve got that out of our system, let’s get back to winning. But then we followed that up by losing at Oklahoma this past Saturday. We hadn’t lost three games in a row in 8 years. By the reaction of some KU fans you would think it’s the apocalypse. We went from being #1 in the country to now being #14 (as of today). Losing three games in a row is not good – but you know what? It happens to everybody. So we sit here today in the thick of a conference title race and we HAVE to get back to winning.

It Ends Tonight by Beginning Again

Enter KSU. The Farmers. The Aggies. Land grant university. Soil judging and livestock judging national champions. What better way to get back to our winning ways than playing and beating our rival. (I use the term “rival” lightly because in order for a team to be a rival they should win occasionally.)

So tonight for the game I’m wearing this shirt in support of my Jayhawks. As a fanbase we need to be rabid in support of our Jayhawks, just like the Fighting Jayhawk. If you’re going to be at home watching the game cheer so loud that they hear you in Lawrence. If you’re going to be privileged enough to be in hallowed Allen Fieldhouse get your butt there early and cheer your ass off the whole game! The losing ends tonight. The winning begins again.

As Jayhawk fans we need to believe in our team – fly your flags at home and on your car. And when you look at your flag you can know and understand that the sky is not falling. We’ll be fine and I’m sensing we’re going to have a good March and hopefully April too. 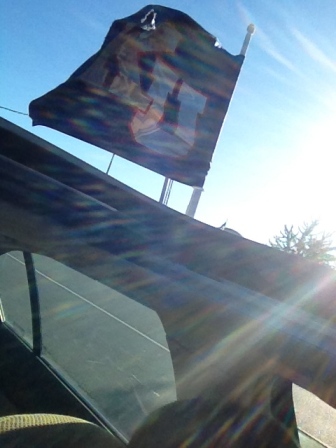 Living in Arkansas I’m surround by Razorbacks. And I get asked all the time, “What does Rock Chalk mean?” My response, which is also espoused on a KU t-shirt, “Another Jayhawk victory!” 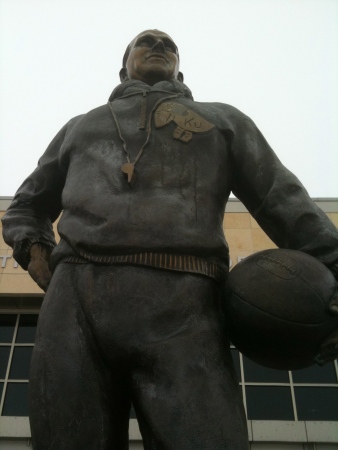 Posted by derekablaylock on February 11, 2013 in sports

Are You A Razorback Yet? What?! I’m A Jayhawk, And Proud Of It!

I’m an outcast, a heretic, a traitor, a back-stabber and all because I’m a Jayhawk, born and bred…living in Arkansas.

I’m from the North. I have a funny accent. I love cold weather, I love ice, I love snow, I love the wind tearing at your face when you step outside and it’s below 0. I’m used to seeing snowfalls in March and sometimes April. “Oil” and “tire” to me are one syllable. Kansas City Barbecue is king.

I truly enjoy living in the south. I love the fried food. I love the accents. I married a beautiful southern belle.

I love the differences between Kansas and Arkansas.

I moved to Little Rock in March of 2008. In April 2008 KU won the National Championship. To me that was pure ecstasy – it was my university that I have grown up watching and attending reach the pinnacle of college basketball, again, in 2008 with the championship. And then I get here and people in Arkansas ask me, “if I’ve become a Razorback yet?” What?! I politely respond, “no”. 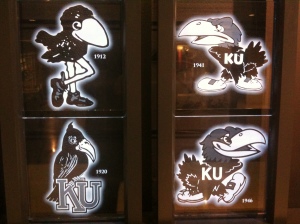 It’s March Madness and NCAA tournament time and for the past week I’ve been flying my KU flag on my car and I can’t tell you how many “you’re a traitor” looks I’ve been getting from people with Razorback license plates. There are more Jayhawks, and KSU Wildcats, and Longhorns, Sooners, LSU tigers in your midst than you may realize…or care to admit.

I am not a Razorback, I married into a family of Razorbacks and I love the energy of the home-team doing well. When Arkansas went to the NCAA tournament in 2009 it was fun. I have seen a couple great Razorback football and basketball games because my wife’s family has football and basketball season tickets. I enjoy watching the Razorbacks and will cheer for them. But do know this, if my job had originally taken me to Baton Rouge, Louisiana I’d probably be saying “Geaux Tigers, beat the pigs”. It’s perspective.

and going to revered Allen Fieldhouse when it was a young and spry 30 year old building. 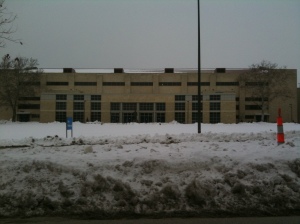 …and football game day is loads of fun but we are definitely a basketball school. In my personal opinion you have never fully experienced college basketball and felt like you’re hanging out with James Naismith (the inventor of basketball and KU’s first head coach) until you’re sitting in Allen Fieldhouse and the bleachers are shaking from people stomping their feet and the roof feels like it could be blown off at any second. Allen Fieldhouse wreaks of popcorn, peanuts, and BBQ and is steeped in what some consider the deepest tradition, one of the winningest programs (5 national championships, 54 conference championships, second in all-time wins)… 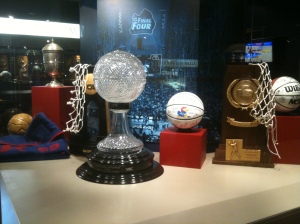 James Naismith the inventor of basketball was KU’s first coach in 1898. Phog Allen played for James Naismith and most consider the grandfather of coaching was KU’s coach for 50 years. Adolph Rupp, University of Kentucky’s famed coach, grew up in Kansas and played at KU under Phog Allen. Dean Smith famed coach at the University of North Carolina grew up in Kansas and played under Phog Allen. Wilt Chamerlain, JoJo White, Paul Endacott, Clyde Lovellette, etc. I grew up watching KU basketball games with the likes of Larry Brown, Danny Manning, Mark Turgeon, Archie Marshall, Kevin Pritchard Scooter Barry, Chris Piper, Downtown Terry Brown, Greg Ostertaag. And then during my college years watching Jacque Vaughn, Jerrod Haas, Scott Pollard, Paul Pierce, Raef LaFrentz, Billy Thomas and many more. I’ve seen so many great teams and great players growing up as a Kansas fan. It starts with the first basketball practice of the year witting with 16,299 of my closest friends at Late Night in the Phog and ends hopefully in April with a trip to the Final Four. We love our basketball.

With the whole Mike Anderson being hired as Arkansas basketball head coach, I personally think it was a bad hire especially considering the amount of money Arkansas paid for him, but I don’t have a dog in the race other than my wife was born and bred a Razorback. I enjoy seeing her be happy when her team does well and I think it’s unfortunate that with all the other – better – candidates out there that Arkansas was blinded by their love affair with the Nolan Richardson era. Arkansas did well during that time…but Mike Anderson was not the best candidate – he is definitely not worth $2.2 million!

When my wife and I travel to Kansas she is the one who has the funny accent (and completely beautiful to me), it’s too cold for southerners, we’re all rude and we don’t eat as much food boiled in oil (fried).

Now for the perspective…

The next time you ask me, “if I’m a Razorback yet”, imagine if I picked you up and placed you in Kansas City to live…

…would you give up your Razorback heritage?

Are you a Jayhawk yet?

I am a Kansan by birth, and Jayhawk by the grace of God. Rock Chalk Jayhawk, go KU!! 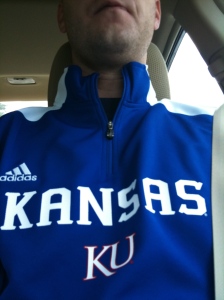 Posted by derekablaylock on March 24, 2011 in culture, sports, Uncategorized